The Erie Police Department has maintained and trained bomb technicians since 1975. The unit consists of five technicians, three from the City of Erie Police, one from Millcreek Police Dept and one from the Erie County Sheriff’s Department. The Bomb Squad is an accredited bomb squad, meeting the FBI national guidelines for staffing, equipment, and training. 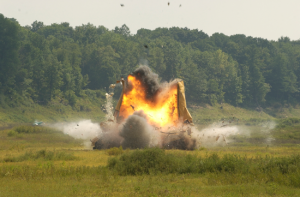 In addition to serving the City of Erie, the Bomb Squad is responsible for all of Erie County and twelve other counties in Northwestern Pennsylvania, a population of about 1,000,000 people.

The responsibilities of the Bomb Squad include: responding to the scene of suspicious packages; rendering safe any explosive device; disposing of recovered military ordnance, and commercial explosives; assisting in the investigation of any suspicious explosions or post blast scenes. Members of the Bomb Squad also assist in SWAT and HNT operations. The squad also works closely with agents form the ATF, FBI, and US Postal Inspectors.

Members of the Bomb Squad are required to attend the six week FBI Hazardous Devices School at Redstone Arsenal in Huntsville Alabama with 40 hours of recertification every three years. All squad members must also be HAZMAT technicians. Bomb technicians are required to have 16 hours of monthly training within the department and 40 additional hours of training outside the department.

For more information regarding the Bomb Squad contacted